Once again I was expected in New York City, this time for a Thanksgiving feast with old friends, including the tycoon and the movie producer. With Sati playing loud and me skipping around my 220 sq ft home in Key West I was attempting to pack, but instead I was futzing.

As is my neurotic way I frequently check my social medias, and lo, what did I see but a message from great friend photographer Patrick McMullan. A Thanksgiving party at Terry Kramer’s in Palm Beach. I chucked my suitcase into my car, drove past the Key West airport and doffed my hat, and sped north. I had done the unthinkable, the unpardonably rude, and accepted the better offer. My New York friends were not amused. You lose some.

I picked up Patrick in Miami and the fun began. First the festive meal in the monolithic moorish Kramer palazzo, where the guests were a mix of impeccably turned out society types and celebrities. Our gracious hostess sported thick ropes of diamonds, like a rap star. After midnight, and the last to leave, we returned to Miami to Patrick’s bayside balconied flat. With many friends visiting for Art Basel we played Gin Rummy with a pack of invitations. The fun lasted a week.

But one night we met up with friends and friends of friends at a restaurant. Upon arrival we went through the ritual of greetings and introductions. Except for one lady who only smirked at me. I told her my name and waited but she continued to smirk. I felt awkward. The lady cocked her head, and grinned. I began to wonder if I was missing something. Still she remained silent, she only pursed her lips. I was entirely puzzled. She just didn’t look remotely like anyone I knew. Was she playing with me, was she having a stroke? Time ticked and we grinned oddly at one another. At last she spoke. Just one word, a French word, though she was clearly not French.

The single word without context meant virtually nothing. Yet something about it snagged me, caught my full attention. Watching her intently I rolled around the sound of her voice, matching it up against the files of my memory banks. The tone triggered something, nagged at me.

But now that voice was in my head, and it caught me short. Tugging an implausible idea into view. Shy to even dare, because I was unsure, I mouthed at her, “Rachel?”

Very slowly she nodded her head, affirmatively. I was shocked.

Fourteen years since we’ve seen each other. She looks so different, all grownup and groomed and happy. We used to cause all sorts of trouble, for sport. Thankfully we were never caught. Afraid of the evident downhill slide ahead I had ruthlessly cut bait. In truth, I’ve missed her.

We both got up from the table and ran into each other’s arms. You win some. Giving thanks. 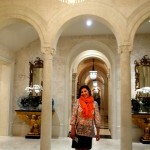 2 thoughts on “You Win Some”