This past week has been all about the Literary Seminar, an annual event rather typical of Key West in that it fully lives up to the hype. The setting is the beautiful and historic San Carlos Institute on Duval Street and the guests are fabled types on the level of Joyce Carol Oats. The theme this year was mysteries and thrillers, and the atmosphere as always was all effervescent charm and wit and rollicking entertainment. Friday night I was lucky enough to scrounge a ticket to hear Carl Hiaasen. Just so happens I read all of Hiaasen’s many books when, years ago, trying to escape the harsh Hamptons winters and I revered him for tickling my cockles. The lecture was great fun as Hiaasen is an oiled entertainer and he held us all in his sway like a ballroom dancer and it was fabulous to be lead along from one hilarious anecdote to another.

As with every year the party of the year, marking the end of the Literary Seminar, is hosted by my friend David Wolkowsky, and I was doubly thrilled to learn Hiaasen was to be the guest of honor. The event was held at David’s downtown rooftop loft, used exclusively for parties, everyone milling half indoors and surrounded by glorious artifacts and half outdoors and in perfectly clement weather and under the glow of a full moon. 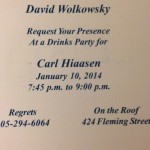 The Party of the Year

As is my way, l I was the last guest to depart the soiree, and while I’m assured Hiaasen attended, I never so much as caught sight of the back of him. Instead, and unexpectedly, David made a special effort to introduce me to another of his legendary friends, the demigod Mr Jimmy Buffett. Buffett is evidently smooth and cool and politely remote, in his perfectly sleek minimalist flip-lops, possibly designed and hand stitched for him by IM Pei. Except I was tongue-tied, after all what do you say to someone whose oeuvres has literally forced you to run out of rooms with your fingers stuffed in your ears? Here was an opportunity to keep quiet.

Like witnessing the flare of a comet cross the night sky I observed David and Jimmy chattering excitedly. Eons ago David gave Jimmy his first gig, and the depths of their friendship was palpable. They grinned like schoolboys, a genuine and mutual adoration. And I realized I’ve seen many such compositions in framed photographs all around David’s many delicious domains. I’ve seen His Eminence in the company of the esteemed and notable. His friends truly love him.

Later, headed for my car and walking past Margaritaville and peering in on the worshipful fans, and knowing that if they only knew their hero was in breathing distance, well they’d probably hurl their gallons of suds.

Another great night in this heavenly tiny city paved with talent and energy, this place is the real thing.

2 thoughts on “The Party of the Year”