Yesterday, after lunch with legendary local visionary and developer David Wolkowsky we sauntered off to visit the Key West Museum of Art & History. 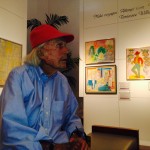 The former Custom House is a 19th century redbrick castle and houses permanent collections from the likes of the late local sculptor/painter Carlos Sanchez, another room devoted to Ernest Hemingway’s books and writing and from now until April please revel in the charms of an exhibition of paintings by the very excellent Tennessee Williams.

David says, “Tennessee did all these paintings on Ballast Key [David’s private island] and he fussed a great deal about how he could only paint if he had ample red wine and Billie Holliday on the record player. And there were no such supplies on the island! So we went to some trouble to get him everything he needed and sorted out.”

One painting, named A Child’s Garden of Roses, depicts Truman Capote shooting a gun. David explained to me, “This was Tennessee’s revenge for a blind piece Truman wrote for Esquire, slyly referring to dog walkers and hustlers, and while no names were mentioned, Tennessee knew it was about him, and had the last laugh!”

Almost all the paintings in the show belong to David Wolkowsky. He and Tennessee Williams were great friends, and this is a delightful tribute to an artist of deep and far reaching qualities. 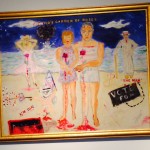 A Child’s Garden of Roses, by Tennessee Williams who in a fit of pique depicts a tiny Truman Capote firing a gun, symbolizing his acts of sabotage, self-wounding and otherwise.