I’ve always liked Kelly McGillis in the movies but my curiosity to meet her was piqued because Key West so adores her. She is certainly not the most famous to grace these shores, but she might easily be one of the most cherished. Her era, back in the day, involved much interaction with the townsfolk and everyone who ever met her fell in love. Intrigued, I said yes when invited to lunch.

Lunch was in the orchid peppered dining room at David Wolkowsky’s town home where we supped on pink shrimp salad  served on cerulean blue china.

When Kelly McGillis lived here she bought properties and opened restaurants. Of the multitude of celebrities who have washed over this coral outpost Kelly McGillis is the name you’ll hear bandied the most lovingly, after Hemingway of course. But no one here today met Ernest Hemingway. Most everyones seems to have met Ms. McGillis.

Over the soup, it was no surprise to find Kelly McGilllis is excellent entertainment. She animated vignettes and in no time I too slipped under the spell. For example, once in Amish country when she fell in step with a Kelly McGillis tour. “I thought attending the tour in disguise would be great fun but it was traumatizing and I’ll never do it again! Everything the guide said was wrong! He said I made all my own clothes for the movie [Witness]. Why on earth would I do that?”

By the time we spooned up cassis sorbet, regaling us with her stories, she had us all crying laughing. She is an actor to her marrow.

After lunch David took Kelly and I to the Custom House Museum to see the paintings made by his great friend Tennessee Williams. Kelly is herself a painter and described an intense sounding mobile she’s in the middle of making. Unfortunately she swears she has no plans to show her work, “Not even posthumously”. After touring the show David and Kelly concurred Tennessee’s unpolished talent is evident and his palette luminous, and the works have a poignant charm.

David Wolkowsky and Tennessee Williams were close friends. David will tell you, “Tennessee was wonderful. He was complex and brilliant.” On the backside of David’s portrait Tennessee penned a touching tribute to his friend. That alone makes the show worth seeing.

Lastly we made our way upstairs to the permanent exhibits, passing beneath a life-sized portrait of David gracing one wall. We settled ourselves in a room designed to look like a train carriage where one can sit and watch a black and white movie on the history of Henry Flagler’s railroad. A train ride David remembers taking as a very young child. 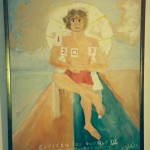 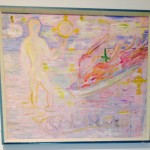 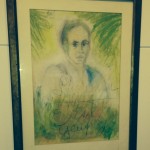